The Indiana University of Pennsylvania's annual TrumpetFest was held on February 22 and 23, 2019, and featured performances by IUP trumpet students and faculty.  The Department of Music at IUP has over 250 students, most of whom are undergraduate music education majors.  The Trumpet Studio includes 15 students and is taught by Dr. Kevin Eisensmith.

Junior and senior trumpet majors present recitals throughout the school year, but many choose to perform during the TrumpetFest weekend.  Among those presenting recitals this weekend were: Michael Buckstein (Pittsburgh, PA), Lucas Deist        (Hollsopple, PA), and Kayla Greer (Landenberg, PA). 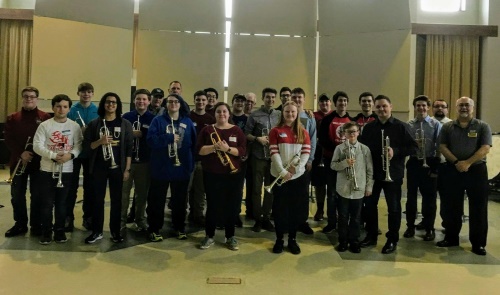 Kevin Eisensmith, trumpet professor at IUP, presented a recital of music for trumpet on Saturday evening, February 23 at 8:00 pm.  Assisting were various “trumpet friends,” including members of the trumpet sections for the Altoona and Johnstown Symphony Orchestras and IUP Trumpet Studio alumni.  Performed during the recital were Vivaldi’s Concerto for Two Trumpets, Bruce Frazier’s Excursions, Nicole Piunno’s Three Snapshots, and Concertino Classico by Joseph Horovitz.  The recital concluded with Terry Everson’s arrangement of There’s a Great Day Coming.

Wilkinson came to the Pittsburgh Symphony from the San Diego Symphony, where he served as principal trumpet for three years. He previously held positions with the Houston Symphony, the San Francisco Symphony, the Oregon Symphony, and the Tucson Symphony. Wilkinson performed as a featured soloist with the San Diego Symphony. Wilkinson is an accomplished teacher, clinician, and chamber music coach. In the summers, he serves as a teaching artist at the Round Top Festival Hill Institute in Round Top, TX. He also has served on the faculties of the University of Houston and Portland State University.  Wilkinson grew up in Norcross, Georgia. A proud graduate of St. Olaf College in Northfield, MN, he pursued additional studies at Arizona State University and the Staatliche Hochschule für Musik in Freiburg, Germany. His primary teachers include Martin Hodel, David Hickman, Larry Black, and Anthony Plog. His appearance was sponsored by the Yamaha Corporation and Volkwein’s Music.

The day began with a warm-up session led by Dr. Eisensmith.  Mr. Wilkinson presented a clinic in the afternoon and a recital titled “The French Influence,” and included Charlier’s Solo de Concour, Fantasie by Francis Thomé, Enesco’s Legende, and Eugene Bozza’s Caprice.  He was accompanied by IUP Professor of Piano Dr. Henry Wong Doe.  Due to a severe thunderstorm the power across campus went out just before the recital!  Fortunately, a few battery-operated stand lights saved the day, and the program went on as planned.

For more information about the music department at IUP, please go to www.iup.edu/music.