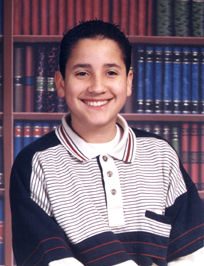 ITG is proud to announce that Carlos Alberto Sanchez of Oklahoma City, Oklahoma, has been awarded the June 2003 Young Artist Award. Nominated by James L. Klages, professor of trumpet at University of Central Oklahoma, Carlos began his trumpet studies at age seven and moved to Oklahoma from Venezuela at age eleven. Currently thirteen years old, Carlos has played principal trumpet with the Oklahoma Youth Symphony. He is currently a member of the jazz band, concert band, and trumpet choir at University of Central Oklahoma.

Professor Klages says, "Carlos is as talented as any student I have worked with. A mature and serious student of the trumpet, he has learned a new solo and etude almost every week since I started working with him. I believe we will hear more from him."

In recognition of his outstanding talents, ITG will provide Mr. Sanchez with a complimentary one-year membership.