Acclaimed trumpet pedagogue and administrator, Daniel Patrylak died peacefully on January 2, 2021, in Connecticut. Dan was Emeritus Professor of Music at the University of Connecticut. A native of Plymouth, Pennsylvania, he was a graduate of the Eastman School of Music where he studied under Sid Mears. Dan auditioned successfully for the United States Marine Band in Washington, D.C., and performed as cornet soloist in concerts and coast-to-coast radio broadcasts. This was followed by positions on the faculty of the Eastman School of Music and with the Rochester Philharmonic Orchestra. An internationally recognized trumpet virtuoso, he co-founded and served as first trumpet of the Eastman Brass Quintet, leading the group on concert tours throughout the United States, Canada, Central and South America, and Israel. He performed as principal trumpet of the Danbury Brass Band of Connecticut during tours of Australia, New Zealand, and Ireland. Professor Patrylak’s students have achieved positions in major symphony orchestras, military bands, and faculty appointments in pre-college, collegiate, and graduate music departments. As a teacher, performer, and administrator at Eastman, Patrylak was influential to such trumpeters as Allen Vizzutti, Phil Collins, Vincent DiMartino, and Marvin Perry. During their student years at Eastman, Vizzutti and Collins were esteemed members of the Eastman Brass Quintet with Professor Patrylak. 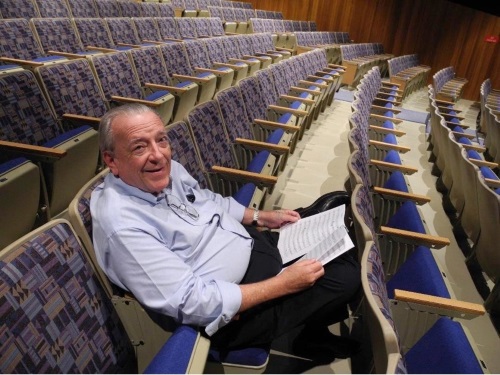 As an administrator, Dan Patrylak held positions as Assistant Director of Academic Affairs and Director of the Summer Session at the Eastman School of Music. He served as Chair of the Music Departments at the University of Texas at Austin and the University of Connecticut. He was actively involved with the Cultural Affairs Committee for the United States Department of State. Dan held positions as Chair of the Board of Directors of the David Hochstein Community Music School in Rochester, President of the Connecticut Music Educator’s Association, and Chairman of the Board of Directors for Opera New England.

Dan Patrylak is a featured performer on recordings for Vox, Mercury, Columbia, and Summit Records. As a charter member of the Eastman Wind Ensemble, he can be heard on the ensemble’s debut recordings under Frederick Fennell, as well as on recordings of the Eastman Rochester Orchestra under Howard Hanson. With the Eastman Brass Quintet, Patrylak can be heard on a double CD album from Summit Records performing Renaissance Suites as well as premier performances of contemporary chamber music of Verne Reynolds. In addition to his work with the Marine Band, Rochester Philharmonic, and the Eastman Brass Quintet, Dan appeared with many outstanding entertainers, and an eclectic mix of touring Broadway shows, Ice Capades, Shrine Circus, Texas Brass Quintet, Hartford Symphony, Virginia Symphony, Nutmeg Chamber Orchestra, Tuxedo Swing Band, and the High Society Dixieland Band.

Patrylak is the recipient of the Distinguished Alumni Award from the Eastman School of Music, He was named Musician of the Year by the Rochester Alumnae Chapter of Mu Phi Epsilon, as well as being the first recipient of the Outstanding Contributions to Bands award from the Connecticut Chapter of Phi Beta Mu, the International Bandmasters Fraternity. In recognition of outstanding leadership, music performance and service to the Eastman School of Music and the greater community, The City of Rochester declared and celebrated Dan Patrylak Day in 1975 with concerts and festivities. The students at the Eastman School of Music further acclaimed their affection and admiration for Dan Patrylak by naming their campus weekend gathering spot in his honor.

Dan Patrylak was a featured presenter at the 2013 International Trumpet Guild Conference held in Grand Rapids, Michigan. For 12 years he was a beloved faculty member at the GVSU Trumpet Seminar in Michigan. Into his 80s, Dan remained active as a teacher, coach, and producer, working with younger students and mature artists.