From August 9 - 13, 2019, the Second Trumpet Arts Festival was held as part of the Tianjin Jinbao Fifth International Music Festival. This five-day event was held in the Jinbao District in the city of Tianjin, China. The festival was sponsored by The Tianjin Cultural Tourism Bureau, The Tianjin Education Committee, The Tianjin Musicians Association, and organized by Tianjin Jinbao Musical Instruments Co., Ltd. 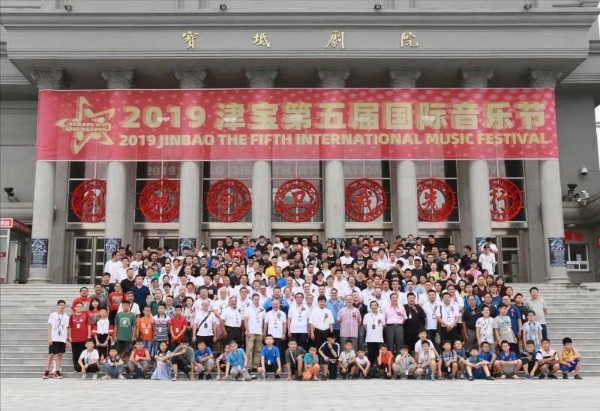 Nearly 100 teachers and professional players joined 140 contestants from school music programs and various performance groups from all around China and also Spain, Canada, Costa Rica, Poland and the United States participated in this festival. The festival featured three major points of emphasis: concerts, competitions and master class lectures that provided students and participants many opportunities to enrich their knowledge and performance skill. The opportunity to network and learn informally over meals as well as in rehearsals, performances and masterclasses also contributed to a grand event for trumpet sharing.

As a major component of the festival, eight competitions offered different age groups opportunities to perform for professional juries. These solo competitions were the Primary School in Group A (Primary 3rd Grade and younger), Primary School in Group B (Primary 4th Grade to 6th Grade), Junior High School, High School, Adult Group and finally the Professional Group.  For all categories except the Professional Group, solo competitions included two separate rounds, one in which all performers were required to play trumpet works by Chinese composers.  This inclusion of Chinese works was done with specific intent by festival hosts to share and promote Chinese trumpet music.

In addition to solo competitions, there were also two competitive ensemble categories for trumpet quartet: Quartet Group A (Age under 16) and Quartet Group B (Age 17 years and above).  This expansion to trumpet ensemble playing as part of the competition offered students and teachers a rich opportunity to be immersed in this area of music making and were enthused by the collaborative work.

The solo Adult Group was a well-populated two-round competition. In the final round, although there were some strong performances however, scores of the performers failed to reach the required 90 points so the highest awards for this group were two silver prizes, which were awarded to Luo Jiaming and Nie Xin respectively.

The Professional Group part of the competition was divided into three separate rounds for these participants who came from various music colleges and professional ensembles.  First-round repertoire required featured the first movement of the Haydn Concerto in E-flat major and Arthur Honegger’s “Intrada”. The second-round of required music was Gottfried Stölzel’s Concerto in D Major and Chinese melodies by Wei Qun and Gu Shuang’s “Concert Etude-Singing and Dancing in Spring”. The third round included all participants performing the complete Charles Chaynes Trumpet Concerto.

The judges for the competitions were composed of university professors and professional ensemble players from China, the US, Canada and Poland. In order to ensure the utmost fairness in this competition, each jury panel was composed of five judges seated behind a screen to obscure the identity of players. Cell phones from the judges were collected and scoring was recorded via an electronic scoring tabulation with each judge entering their score following each performance. Competing musicians drew numbers just prior to the competition to decide performance order. The scoring process included the removal of the highest and the lowest score with remaining scores divided by three.

The trumpet ensemble quartet competition was only established in recent years. Its purpose is to encourage students to cooperate with each other to improve ensemble skill and communication and cooperation in performance preparation. Fantasy, a student group from the Beijing Central Conservatory of Music won the Gold prize in this category.  Gold Digger, students from The Tianjin Conservatory of Music and Wenting Shengyue from a high school in Beijing won the silver prize.

Each night during the festival, there were wonderful brass quintet and trumpet solo concerts provided by guest artists and clinicians. On the evening of August 9, the opening ceremony of the show was the Strombor Brass Quintet from Spain. Their presentation was full of passionate energy, especially in the Astor Piazolla Tribute arranged by Joe Burgstaller.  The program also included works by Serrat, Cebrián, Piqueras and Castro.  All of the players in this ensemble demonstrated their full skills presenting a great variety of music exclusively on instruments chosen one day earlier when they visited the Jinbao brass instrument factory nearby. An added performer for the concert was Daniel Jiménez Castro, who soared in the extreme upper register on the unusual corneta Carmen, an instrument that looks like a military bugle with one added rotary valve.

On the evening of August 10th there were two evening performances. Dr. Leonard Candelaria, former ITG President and University of North Texas Emeritus Professor joined Purdue Fort Wayne School of Music Director Dr. Gregory Jones in presenting a program of solo and duo music. Their concert opened with the Petronio Franceschini Sonata in D for two piccolo trumpets. This beautiful work featured imitation and ornamentation during four short movements that offered both slow and faster melodies. The program continued with Robert Starer’s Invocation and Richard Peaslee’s Nightsongs played by Dr. Jones and, Charles Koff’s La Virgen De La Macarena and John Williams: With Malice Toward None offered by Dr. Candelaria. The concert ended with a bravura performance of an engaging two trumpet and piano version of Manuel de Falla’s Danse Rituelle Du Feu (Fire Dance) as arranged by Luis Araya. The combination of the C trumpet and piccolo trumpet in this arrangement produced some wonderful colors as the duo energized a fiery dance to the rhythmic accompaniment of the piano.

On that same evening, the second performance featured the Boston Brass, Boston, a group founded by Boston University music students in 1986. This ensemble offered virtuoso playing as they traversed classical music, jazz and a variety of ethnic styles.

On August 11, Nancy Taylor from the University of Texas-El Paso and Jason Bergman from Brigham Young University offered two more individual displays of musical presentation. Ms. Taylor offered a relaxed and delicate sound as she presented the William Friedrich Fasch Concerto in D, Stanley Friedman’s Solus for Unaccompanied Trumpet, Three Preludes of Gershwin arranged by Brandon Ridenour, The Grand Russian Fantasia of Jules Levy and Ordner Seg by Baadsvik Oystein.  Dr. Bergman exhibited a powerful and expressive sound on C trumpet as he showcased Centennial Horizon and Amazing Grace by composer Kevin McKee along with Jean Hubeau’s Trumpet Sonata, Concert Etude by Alexander Goedicke and his own arrangement of Richard Wagner’s Der Engel.

Cheng Xizheng and Richard Stoelzel from McGill University in Canada were the featured performers on August 12. Cheng Xizheng is an outstanding young trumpeter from China. He played Parable for Solo Trumpet by Vincent Persichetti, Sonatina by Hans Werner Henze and Solus by Stanley Friedman was well received and well executed. He also offered an encore of Mozart’s famous Queen of the Night aria on piccolo trumpet.  Xizheng communicated to the audience his mature technique developed in study at the Central Conservatory and in competitions like the one now featuring him.

Richard Stoelzel offered a program that included Scherzo by Brendan Collins, Viaggio Vita and Storyteller by James Stephenson, Passion Dance by Erik Morales, With Malice Towards None by John Williams, and the Joseph Turrin arrangement of Gershwin’s Someone to Watch Over Me.

These nightly concerts were a great opportunity for students and guests to hear high-level musical expression.