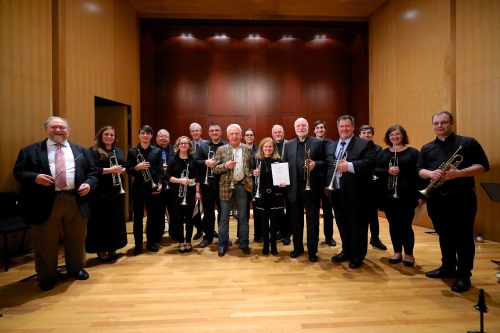 Ronald Romm began the day with a warm-up session based on the teachings of James Stamp. Romm. Past ITG President Dr. Cathy Leach presented a clinic assisted by Doc Severinsen. Her clinic, Staying in Balance: Exercises to Maximize Sound & Efficiency, guided the musicians thru several exercises and her demonstrations conveyed the desired results of those exercises.

Chris Hasselbring & Kirsty Montgomery presented The Natural Trumpet –Why Bother?  The Brass For Beginners polycarbonate natural trumpets were used by the volunteers.

The final clinic was a moderated by Doc Severinsen and Cathy Leach. Immediately following Doc’s session was a brief rehearsal and performance of the Aida Fanfare that has become so popular at conferences. Doc rehearsed nearly eighty trumpeters and then performed the piece one time. 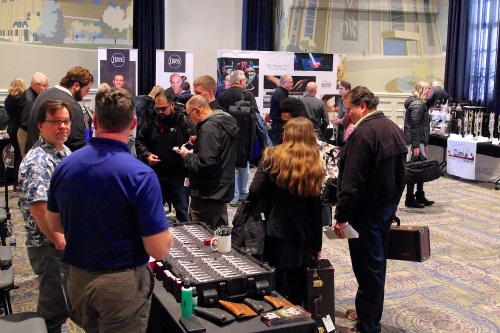 The evening concert began with Allen Miller & Larry Powell performing a new duet fanfare Emerge, written by Butler student Alex McGrath. The Indiana State University Trumpet Ensemble followed with Toto’s Rosanna, arranged by director Lexie Signor. Ronald Romm was showcased in the Canadian Brass arrangement of Amazing Grace, performed with the University of Indianapolis Brass Quintet. Ron was then joined by Doc, Cathy, and local players including Dan “Chopsaver” Gosling, in a performance of Someone To Watch Over Me conducted by ITG Calendar Editor Dr. Al Lilly. Bruckner’s Os Justi, arranged by Auburn professor of trumpet Mark Degoti, was exquisitely performed by the University of Indianapolis’ Trumpet Ensemble, conducted by Larry Powell. The UIndy Brass Quintet rejoined onstage for a performance of Kerry Turner’s The Casbah of Tetouan, and then the Ball State Trumpet Ensemble performed Kevin McKee’s Durrenhorn Passage, with director and performer Eric Rodriguez leading the group. Cancer Blows was an integral part of the day’s events with several items being auctioned off all for the cause, and $360 was raised and donated to the Ryan Anthony Foundation. Anthony wrote a wonderful note to be delivered by Doc & Ron during the evening performance which concluded with a mass trumpet ensemble featuring Doc, Ron, Cathy, & Larry Powell as the soloists in Peter Meechan’s Song of Hope with longtime ITG member Charles Conrad conducting.

The entire day was made possible by the generous donations from sponsors and from an ITG Grant.