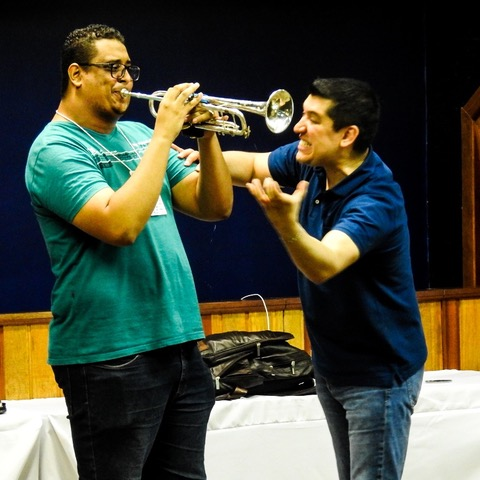 Over 200 trumpeters attended this year’s conference, including orchestral players and university professors from all over Brazil. In its five days duration the conference featured workshops, master classes, recitals, and concerts. This event took place at the University of Campinas, which offers excellent musical venues. The local media advertised the event on TV, social and press outlets.

On the first day, participants who submitted proposals for performances and research room presented their papers, posters and performances.

After an eliminatory round made by video, fifteen semifinalists were selected for the live auditions of the two solo competitions promoted by ABT at this event.

The first competition was the Concurso Henrique Alves de Mesquita. The live round consisted of J. Haydn’s Trumpet Concerto’s first movement and a new work Simún, composed for this competition by Gilson Santos, resident composer at this conference.

The second competition was a solo jazz/improvisation, Concurso Claudio Roditi, a first of it’s kind in Brazilian trumpet music history.In order to advance to the finals round,competitors had to play Cherokee and Recife’s Blues, tunes chosen by Claudio Roditi himself.

The judges’ committee of both competitions were composed by the conference’s guest artists and other renewed performers.

To end the afternoon, Terry Warburton gave a master class about mouthpieces, embouchure strength and also demonstrated some of his gadgets, such as the P.E.T.E, A.P.E and wood mutes.

During the following four days of the conference, guest artists took turns presenting master classes and clinics in the mornings and afternoons.

The final round of the solo competition, Concurso Henrique Alves de Mesquitatook place in the afternoon. The final round repertoire consisted of the Arutiunian Trumpet Concerto and the candidate’s work of choice composed by a South American composer. Maurilio Teles won the second place, and Erick Venditte and Renan Sena tied at third place. There was no first-prize winner.

The evening started with a recital by Juan Fernando Avendaño and Franco Carranza. They performed pieces from their countries, which filled the audience a variety of colors and beautiful melodies.

During the fourth day, ABT promoted an outdoor concert at Concha Acústica do ParqueTaquaral. The concert featured the Lyra Bragança, a band formed by children and teenagers from a social project, and Banda Sinfônica de Sumaré with Pacho Flores and Brazilian soloists Daniel Gomes, Bruno Soares, Paulo Viveiro, Otávio Nestares and Bruno Belasco (first prize winner of the competition Concurso Claudio Roditi). After the concert, Bruno Soares was awarded a brand new Stomvi Mambo Trumpet as his winning prize, the trumpet was provided and delivered by Vicente Honorato, owner and trumpet maker of Stomvi Trumpets.

Marcelo “Gnomo” Rocha hosted the late evening JAM session at “Lado B” bar. He performed with his quintet and presented Brazilian music standards.

The last day of the event started with five different master classes happening at the same time. This was envisioned as an opportunity for the participants to ask their last questions and play for some other guest artists. Later in the morning, Vicente Honorato continued with his discussion from the previous day and opened up for questions.

The closing concert of the ABT 2019 was presented at the concert hall of the Teatro Carlos Gomes. The concert started with Naber Mesquita conducting a trumpet ensemble prelude comprised of the conference's participants.

That night, Oscarindo Roque and Clovis Beltrami (trumpet professors and scholars from Campinas’s area and members of the trumpet section of theOrquestraSinfônica Municipal de Campinas)were also honored with a plaque for their contributions to the Brazilian trumpet community.

This conference was made possible by Brazilian higher education institutions, federal government sponsorships programs and an ITG Affiliated Chapter grant.