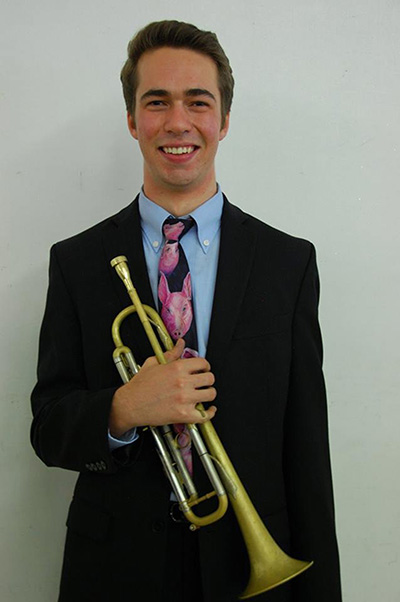 Andrew Stephens is a graduate of Rio Americano High School in Sacramento, California, and is currently a freshman at UC Berkeley. While at Rio Americano, Andrew played lead trumpet and was soloist in their award-winning AM Jazz Ensemble for all four years of high school. He has studied trumpet under the tutelage of Maurice Montgomery, Tom Peron, Larry Lunetta, Tiger Okoshi, and Steve Roach.

Andrew has attended summer jazz camps at California State University, Sacramento; the University of the Pacific; Sacramento Traditional Jazz Society Summer Camp in Northern California; Centrum Jazz Workshops in Port Townsend, Washington; and the 2012 Berklee School of Music Five-Week Summer Program on a full-tuition scholarship. In addition, he was honored to receive a lesson in the home of Wynton Marsalis in 2014.

Andrew was selected to play lead trumpet in the 2014 Grammy Camp—Jazz Session. At the Grammy Camp, he spent ten days in Los Angeles, rehearsing and performing under the direction of Mr. Justin DiCioccio. This elite group of high school musicians from around the country attended the 56th Annual Grammy Awards Show, recorded a CD at Capitol Records, and performed at the prestigious Grammy nominee reception and after-ceremony party, as well as at various other venues during the week leading up to the award show.

In addition to being a dedicated musician, Andrew was also recognized by the National Merit Scholarship Program as a Commended Scholar, by the College Board Organization as an AP Scholar with Distinction, and by the National Honor Society.

Andrew graduated from high school with honors in June 2014 and currently attends UC Berkeley as a math major (his other passion). He plays lead trumpet in UC Berkeley’s large jazz ensemble, under the direction of Steve Campos, and in an advanced jazz combo, under the direction of Dann Zinn. As the June 2015 Young Artist Award recipient, he will receive a one-year complimentary membership to ITG. Congratulations, Andrew!